Bird abatement (removal of nuisance birds) using raptors has been proven as the most effective and “green” method available.  When coupled with modern technology and cutting edge techniques, the rate of success can be better than 99.99% !

Wild birds in sizable numbers have been known to cause thousands of dollars worth of damage to crops, buildings, airplanes and more.  It is not our goal to destroy these invasive animals, but simply to “train” them to move elsewhere.

Current measures typically used include poisoning and/or shooting the birds.  This may be an immediate and quick solution, but it creates many other hazards as well.  Poisons will affect any animal that consumes the poison such as song birds, and can also affect any animal that may feed on the dead animal such as foxes, vultures, raccoons, or a host of other scavengers.  Shooting of the birds not only poses a safety threat from the use of firearms, but the lead left over is toxic to the environment.  It too can accumulate in scavengers, but also in the water systems as well.  The killing of birds also leads to a large number of dead animals that can spread disease.

Sky Kings has developed several different methods for removing these animals from different scenarios.  Common problem birds we handle include, but are not limited to: Pigeons, Starlings, Grackles, Seagulls, Robins, Sparrows, Crows, Ravens, and even Canada Geese!

Starlings, Pigeons, and Grackles tend to accumulate on the refining structures for warmth, and shelter.  Their feces can destroy expensive equipment, create a hazardous work space, and harbor nasty diseases.  We have developed methods using falcons, hawks, and owls to teach the invaders that the refineries are not safe places to roost.  Our techniques allow us to reach 99% abatement in just a few weeks! 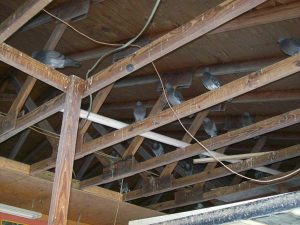 Pigeons can be extremely hard to remove, and create incredible amounts of waste, especially when nesting and raising young.  We use our falcons to haze birds on the outside of buildings, while using hawks and owls to chase them out of the insides.  We also offer humane trapping and removal programs, as well as year long maintenance packages.

A single bird strike could not only cost millions in damaged aircraft, but cost countless lives.  Birds tend to congregate in the open spaces surrounding runways, hangars, and warehouses.  Hawks and falcons are employed to chase away feeding or congregating birds to keep the airport free of potential accidents

Seagulls are a common problem around landfills.  Not only do they leave behind feces, but they spread the trash and debris over miles.  Gulls are large and extremely stubborn birds, however they learn quickly to fear falcons and hawks chasing them down.  By removing the birds you help prevent pollution from trash being scattered as well as limit the transmission of disease and bacteria.

As fruit such as cherries, blueberries, olives, or many other items ripen, birds are naturally attracted to them for food.  Robins, starlings and other birds have been known to invade these places on a daily basis to feed.  Not only do they cost the growers money in lost fruit, but they must also spend time and money to sort out the damaged product.  By flying falcons on a routine basis right before picking begins, and as the fruit ripens, the foraging birds can be kept away by the presence of a predator.

Recently Canada Geese have begun to invade golf courses and parks.  We have developed a method using raptors and dogs to team up and chase geese away.  Geese can destroy a newly sodded green, and leave behind a virtual minefield of droppings.

Our methods can be made to fit virtually any facility. Feel free to contact us to ask questions or get more information.